Background: The psychological distress caused by cancer can remain long after remission. With advanced curative treatments, many pediatric patients continue to have late complications that interfere with neurologic, physical, and social development.

Methods: A search of published articles including pediatric and adolescent oncology and PTSD was performed. The search was narrowed to peer-reviewed articles published after 2010 that presented empirical data and were specific to post-trauma or post-traumatic stress.

Findings: Significant findings for PTSD and PTSSs were reported in ACSs. ACSs suffering from PTSD and PTSSs should be identified and treated appropriately based on age, diagnosis, treatment, and comorbid symptoms.

PTSSs include re-experiencing an event and completely avoiding emotions related to trauma (American Psychiatric Association [APA], 2013). The definition of PTSD includes one occurrence of re-experiencing, three avoidance symptoms, and two symptoms of increased arousal (APA, 2013). Also, the definition of PTSD includes PTSSs that last for at least one month after a traumatic event and PTSSs that ultimately become physical symptoms that lead to a decline in overall function (APA, 2013). PTG is a psychological construct. When an individual has a traumatic, life-changing experience, this experience eventually can lead to beneficial changes in outlook, priorities, and relationships (Turner-Sack et al., 2012). Focus in pediatric cancer has shifted significantly, from high mortality rates to an increasing number of survivors who are learning to cope and adapt. The paradigm opens doors for research to develop and enforce interventions for ACS.

The ongoing psychological distress caused by cancer can remain long after remission. The Children’s Oncology Group (COG) implemented long-term follow-up guidelines for childhood, adolescent, and young adult cancer survivors. These guidelines promote healthy lifestyles, arrange continual monitoring of health conditions, expedite early identification of possible late symptomatology, and provide a prompt intervention for potential late effects (COG, 2013). According to COG (2013), these guidelines provide standards of practice for follow-up care for pediatric patients with cancer and their providers. COG recommends annual psychological evaluations and continual monitoring. A baseline neurologic evaluation for patients at increased risk for cognitive comorbidities also is recommended. High-risk ACSs should have frequent reevaluations (COG, 2013). Because of resource limitations, most notably lower income, these guidelines are not smoothly executed (Kahalley et al., 2013). For example, in a study by Kahalley et al. (2013), some families chose not to follow through on referrals recommended by their providers because of income level. Parents may be forced to choose between a day of pay and taking their child to a clinic. In addition, when children are referred for psychological services in a nearby area or community, the provider’s survivorship expertise could have limitations. Even when healthcare providers and patients’ families are proactive, operational barriers in the medical field limit necessary school or mental health resources in many settings (Kahalley et al., 2013).

With advanced curative treatments, many pediatric patients continue to have late complications that interfere with neurologic, physical, and social development. In the Childhood Cancer Survivor Study (CCSS), 9,126 ACSs and 2,968 siblings completed an assessment of their suicide ideation within the past week (Recklitis et al., 2010). Results indicated that 8% of ACSs reported suicide ideation, compared to 5% of sibling controls. These findings correlated to the physical health of the patients (Recklitis et al., 2009). Unfortunately, the processes to identify PTSD symptoms and other mental health issues in ACSs are suboptimal (Hahn, Hays, Kahn, Litwin, & Ganz, 2015).

Allostatic load is defined as physiological consequences of chronic stress on the body (Hahn et al., 2015). Examples of allostatic load may include high blood pressure, increased cholesterol, and increased cortisol levels. These physiologic implications can increase with the chronic stress associated with cancer and may be elevated in individuals experiencing PTSD symptomatology (Hahn et al., 2015). The effect of allostatic load on individuals can negatively affect their overall health status and lead to potentially life-altering repercussions. Similarly, in a study by Schwartz et al. (2010), 156 cancer survivors and 138 controls completed the Health Knowledge Inventory. Results confirmed that cancer survivors have almost double the number of health problems when compared with healthy controls (5.6 versus 2.6). Significantly more comorbid symptoms could lead to enhanced psychological distress, including PTSD and PTSSs (Schwartz et al., 2010).

Risk Factors for PTSD and PTSSs

Table 1 lists several characteristics of a diagnosis of PTSD or PTSSs that lead to differences in overall psychological stress. These risk factors should be used to stratify adolescent patients for targeted screening. 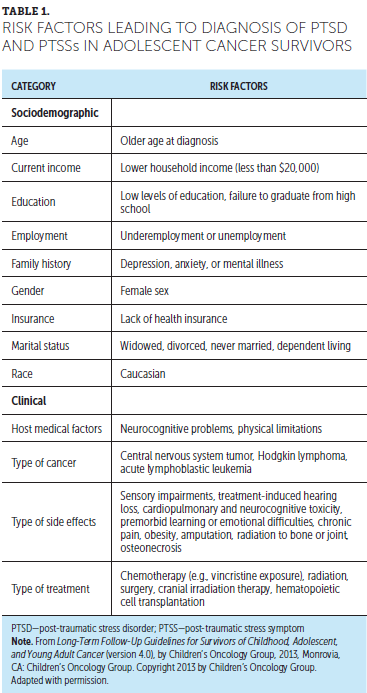 Screening for PTSD and PTSSs 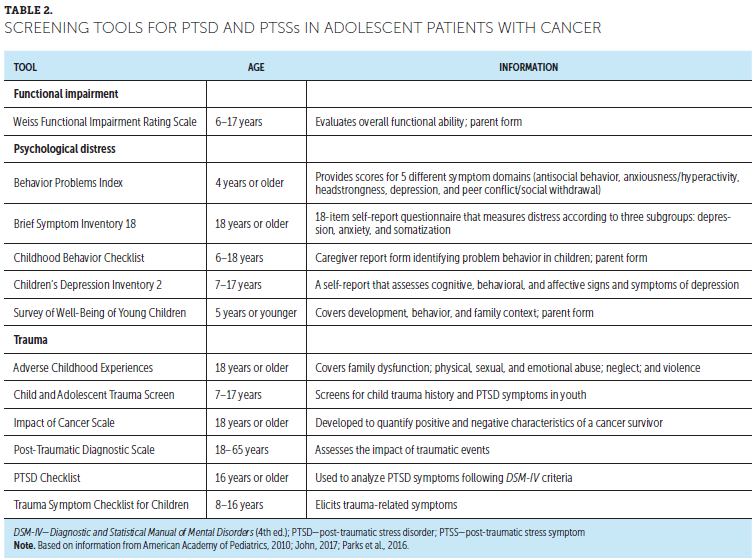 Most studies evaluating adolescent PTSD and PTSSs use CCSS, which is a subdivision of COG’s long-term follow-up study. CCSS is a study of childhood cancer survivors aged 5 years or older and diagnosed before age 21 years (Brinkman et al., 2013, 2016). The cohort has been assembled from 31 centers in the United States and represents 35,923 childhood cancer survivors and more than 5,000 siblings (Brinkman et al., 2013, 2016). Other cohorts include the Cancer Survivor Registry and the St. Jude Lifetime Cohort study.

A search of published studies including pediatric and adolescent oncology and PTSD was performed using PubMed, Google Scholar, and CINAHL®. The search was narrowed to peer-reviewed articles published after 2010. For studies to be included, they had to present empirical data and be specific to post-trauma or post-traumatic stress. The results had to be specific to post-trauma in ACSs in the United States who were either diagnosed at adolescence or were adolescents at the time of the baseline survey. Keyword stems included adolescent, adolescence, AYA, pediatrics, and pediatric, followed by oncology and cancer, and last, post-trauma, post-traumatic stress disorder, and post-traumatic stress symptoms. From the combined search, 100 articles were identified from 2010–2017. Using the inclusion criteria previously stated, nine articles were analyzed.

ACSs have an increased risk of developing long-term psychological effects based on their diagnosis, treatment, and support system. Evaluation and treatment are crucial in long-term survivorship care.

Mental health issues of ACSs are distinct from those of younger children and adult populations. In addition, ACSs may be treated inappropriately or inadequately by psychological cancer services (Zebrack et al., 2013). Of note, studies suggest that the unmet need for professional psychological services increased as ACSs reported negative health-related symptoms from treatments (Zebrack et al., 2013). Similarly, in a study by Kahalley et al. (2013), ACSs experienced mental health hardships that were not adequately managed by appropriate psychological services.

PTG is positive change following a cancer diagnosis and treatment (Smith, Samsa, Ganz, & Zimmerman, 2014). The term post-traumatic indicates that this growth occurs after an extreme or life-changing event. This phenomenon is not caused by other minor stresses, nor is it considered a natural process of development (Sumalla, Ochoa, & Blanco, 2009). In connection to PTG, studies define resilience as a positive psychological event, despite direct exposure to traumatic experiences (Phipps et al., 2014). In a study exploring the relationship between PTSSs and PTG, researchers found no association between PTSSs and PTG at 12 months following diagnosis (Zebrack et al., 2015). Zebrack et al. (2015) also reported a relationship among a specific post-traumatic stress symptom, re-experiencing it, and two signs of PTG (new possibilities and personal strengths). The results suggested that re-experiencing may be psychologically adaptive for survivors. With this knowledge, the need to foster a line of open communication with family, friends, other survivors, or healthcare providers to discuss fears, worries, or concerns can help enhance understanding of the diagnosis and lead to positive outcomes in life after cancer (Zebrack et al., 2015).

Although providers may observe PTG in adolescents as clinically significant, a provider must understand that high levels of PTG are independent of distress (Arpawong et al., 2013; Smith et al., 2014). The presence of psychosocial distress is not entirely avoidable because positive and negative outcomes occur in the adjustment to cancer (Arpawong et al., 2013). Survivors who experience substantial PTG also may be highly distressed (Smith et al., 2014). Therefore, screening for PTSSs is critical, independent of the identified growth.

Role of the Advanced Practice Nurse

Providers can best address unmet needs of ACSs by determining and assessing their risk. Proactive care includes a plan for prevention and guidance based on risks associated with ACSs (McCabe et al., 2013). Many ACSs are lost to follow-up when services with their interprofessional oncology team are discontinued because of age (McCabe et al., 2013). Patients should continue to be followed into adulthood by an interprofessional team, including an oncology advanced practice nurse (APN), who is in the best position to evaluate coping and psychological status. APNs should be aware of adolescent adherence to care throughout the transition into adult survivorship.

APNs can advocate for their patients by securing health insurance and access to care. The socioeconomic impact of cancer on ACSs is considerable (Zebrack & Isaacson, 2012). As adults, ACSs have been reported to be six times more likely than siblings to report health-related unemployment and almost twice as likely to be unemployed but actively seeking work (Zebrack & Isaacson, 2012). ACSs in the United States are more likely to be uninsured as adults compared to other age groups (Zebrack & Isaacson, 2012). ACSs’ higher risk for unemployment contributes to a higher risk for lacking health insurance, limiting access to appropriate follow-up care. Advocacy does not stop at guaranteeing proper insurance for this patient population but can continue in the form of policy and institutional changes, as identified in Figure 1.

Childhood camps specifically for ACSs give continuous social and emotional support and access to information (Beckwitt, 2014). Themes of cancer camps include normalcy, meaningful camp experiences, and access to resources (Beckwitt, 2014). Recommendations to promote the abilities of ACSs to cope with cancer include information, practical support, emotional and social support, and policy and institutional changes.

Despite studies acknowledging PTSD and PTSSs in ACSs following cancer remission, a small number of studies have explored the prevalence and predictors of distress and mental health issues in this population (Kwak et al., 2013). Future research should examine the etiology of prevalence and predictors of PTSD and PTSSs and how it affects the road to recovery and the stability of ACSs in the long-term. Monitoring the developmental course of specific comorbid symptoms (e.g., the effects of central nervous system tumors) can help introduce individualized therapy and improve functional outcomes to ultimately reduce the long-term impact for ACSs (Brinkman et al., 2016). Future research should identify and implement clinical steps to help transition ACSs to experience higher levels of PTG and continue to investigate individual attributes that explain PTG after cancer remission (Smith et al., 2014). 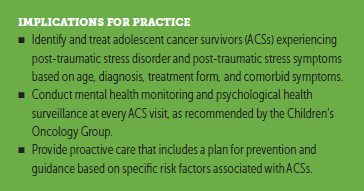 COG guidelines recommend mental health monitoring and psychological surveillance for all ACSs at every visit. A subset of ACSs reports clinically significant mental health difficulties, including PTSD and PTSSs after being diagnosed with cancer. As providers, involving ACSs in their health care, encouraging self-reliance, and promoting autonomy can lead to positive mental health. Advocacy for ACSs in the hospital and clinic settings sets the stage for further outreach and collaboration between provider entities. Psychological screenings with links to appropriate health services are essential in supporting vulnerable ACSs in this developmental chapter and their transition to adulthood. 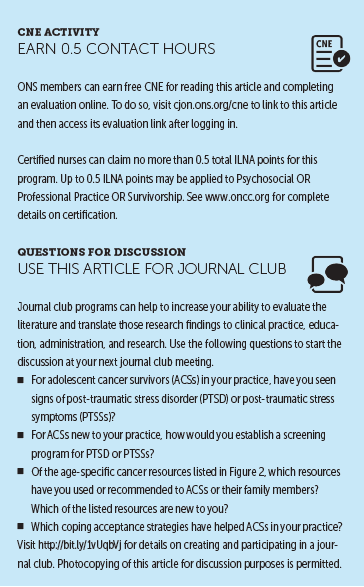 Brianna I. Katzman, BSN, RN, MSN, CPNP, is a pediatric nurse practitioner and Rita John, EdD, DNP, CPNP, PMHS, FAANP, is an associate professor, both in the School of Nursing at Columbia University in New York, NY. The authors take full responsibility for this content and did not receive honoraria or disclose any relevant financial relationships. The article has been reviewed by independent peer reviewers to ensure that it is objective and free from bias. Katzman can be reached at bkatzman8@gmail.com, with copy to CJONEditor@ons.org. (Submitted February 2018. Accepted March 25, 2018.)

Chemotherapy and Immunotherapy Guidelines and Recommendations for Practice