Problem Identification: Women taking aromatase inhibitors (AIs) as part of the management of hormone receptor–positive breast cancer experience more symptoms of sexual dysfunction, including vaginal atrophy, as opposed to postmenopausal women and women treated with tamoxifen (Nolvadex®). Vaginal testosterone could be an alternative to estrogen, which is contraindicated in this population.

Literature Search: A systematic review was completed by searching PubMed and Scopus databases.

Data Evaluation: 64 search results were reduced to a final sample of 3 articles after applying inclusion and exclusion criteria.

Conclusions: Vaginal testosterone shows preliminary promise as an option to manage sexual side effects of AI therapy in postmenopausal cancer survivors; however, available data are too limited to draw practice-changing conclusions.

Implications for Research: Large-scale randomized, controlled trials need to be completed to evaluate the efficacy and safety of vaginal testosterone in women taking AIs.

Breast cancer is the most prevalent cancer among women in the United States; American women have a 12% lifetime risk of being diagnosed with breast cancer (American Cancer Society [ACS], 2015). ACS (2015) estimated that, in 2014, about 3.1 million women in the United States with a history of breast cancer were either cancer-free, had current evidence of disease, or were actively undergoing treatment. Of these 3.1 million cases, about 84% of breast cancers express the estrogen receptor and/or progesterone receptor, for which long-term systemic endocrine therapy may be indicated (ACS, 2015; Lester, Pahouja, Andersen, & Lustberg, 2015). Endocrine therapy usually consists of either a selective estrogen receptor modulator (SERM) in premenopausal women or an aromatase inhibitor (AI), used most frequently in postmenopausal women. Both classes of drugs suppress circulating estrogen and, therefore, have the potential to initiate or exacerbate symptoms of sexual dysfunction (Lester et al., 2015).

The benefit of adjuvant endocrine therapy in hormone receptor–positive breast cancers is well established and continues to be the standard of care for this patient population (National Comprehensive Cancer Network [NCCN], 2016). In studies comparing tamoxifen (Nolvadex®) to letrozole (Femara®), AIs were superior to SERMs (Regan, Price, Giobbie-Hurder, Thurlimann, & Gelber, 2011). Specifically, letrozole improved disease-free survival, time to distant recurrence, and overall survival when compared to tamoxifen (Regan et al., 2011). Given the established benefit of AIs, their use is frequently part of the comprehensive disease management strategy for patients with breast cancer with hormone receptor–positive disease. In addition, AIs have demonstrated efficacy in primary prevention of breast cancer in postmenopausal women and, therefore, are increasingly prescribed for postmenopausal women identified as having an elevated risk of breast cancer (Cuzick et al., 2014).

The ability of AIs to inhibit endogenous estrogen synthesis results in low estrogen levels, which, in turn, affects sexual functioning (Kallak et al., 2015). Women treated with AIs often exhibit more severe symptoms of vaginal atrophy as compared to postmenopausal women and women treated with tamoxifen (Kallak et al., 2014). Kallak et al. (2014) found that the vaginal pH of women treated with AIs was higher than that of women treated with tamoxifen and that of postmenopausal controls on vaginal estrogen therapy. A cross-sectional survey found that 93% of women taking AIs for 18–24 months experienced sexual dysfunction, and 75% of these women reported distress as a result (Schover, Baum, Fuson, Brewster, & Melhem-Bertrandt, 2014). Although estrogen is standard therapy for vaginal atrophy and its related effects on sexual functioning, in AI-treated women, estrogen replacement is contraindicated (Kallak et al., 2015). As the number of women taking AIs continues to rise, practitioners should be knowledgeable of appropriate strategies and therapies to manage the side effects of these medications, specifically sexual dysfunction.

The electronic databases of PubMed and Scopus were searched using the following keywords: aromatase inhibitor, breast cancer, cancer, vaginal testosterone, vaginal atrophy, sexual dysfunction, and female sexual functioning. Sixty-four studies with human participants, published from January 2007 to February 2016, were identified and reviewed for vaginal testosterone as an intervention for sexual dysfunction (see Figure 1). The identified studies were further examined for those relevant to women treated with AIs. Only two studies specifically addressed outcomes for women on AIs, so to comprehensively review the relevant data on vaginal testosterone, articles that focused on the use of testosterone in women with breast cancer not on AIs were also included. Three articles were identified for this integrative review: one randomized, controlled trial (RCT) and two prospective cohort studies (see Table 1). 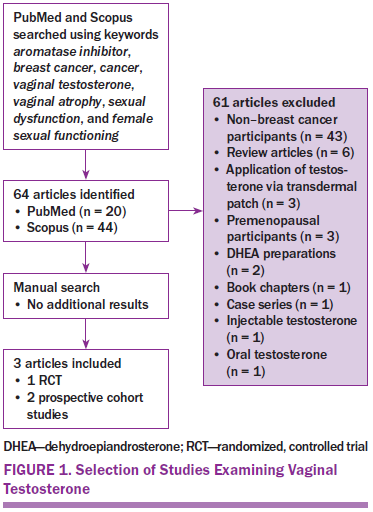 In studies that used testosterone without estrogen, which includes Witherby et al. (2011), Dahir and Travers-Gustafson (2014), and Barton et al. (2007), minimal side effects were identified. Witherby et al. (2011) reported a toxicity profile that included abnormal hair growth, acne, vaginal rash, pruritus, and moderate symptoms of vaginal discharge. In Witherby et al.’s (2011) cohort, symptoms that improved while taking vaginal testosterone included acne, depression, and vaginal and thigh burning. No side effects led to discontinuation in any study, and 91% of participants in Dahir and Travers-Gustafson’s (2014) study continued to use the vaginal testosterone after study completion, indicating a well-tolerated toxicity profile (Dahir & Travers-Gustafson, 2014; Witherby et al., 2011). Barton et al. (2007) reported no untoward side effects associated with the use of testosterone. Although these studies show promise regarding the safety profile, they lack the adequate number of participants to support definitive statements about safety.

The prevalence of sexual dysfunction among women taking AIs is significant; this side effect has been cited as a major reason for nonadherence (Kyvernitakis et al., 2014). Given the well-established efficacy of AIs regarding decreasing breast cancer risk, clinicians and patients should be well equipped with strategies to minimize side effects that may contribute to nonadherence. Witherby et al. (2011) and Dahir and Travers-Gustafson (2014) completed appropriately designed pilot studies that yielded promising results, suggesting the effectiveness of vaginal testosterone. Vaginal testosterone has emerged as a potential strategy to manage AI-associated sexual dysfunction. When examining the evidence, except for Barton et al.’s (2007) RCT, which used transdermal and not vaginal testosterone, current literature suggests testosterone may have a role in the management of sexual dysfunction that results from systemic endocrine therapy.

The application of testosterone to manage sexual dysfunction is not novel; subcutaneous, intramuscular, and transdermal preparations with and without estrogen have been therapies for hypoactive sexual disorder in menopausal women. Fernandes, Costa-Paiva, and Pinto-Neto (2014) compared the effect of vaginal estrogen, testosterone, polyacrylic acid, or oil lubricant alone on postmenopausal sexual dysfunction in an RCT in which 20 patients received 300 mcg of testosterone, vaginally, for 12 weeks. Women using 12 weeks of vaginal testosterone showed an improvement in all domains of the FSFI (Fernandes et al., 2014). Practice guidelines for the use of testosterone in women were published by the Endocrine Society (Wierman et al., 2014). However, application of these guidelines in women with a history of hormone receptor–positive breast cancer and, even more specifically, those taking AIs, has yet to be established. Witherby et al. (2011) and Dahir and Travers-Gustafson (2014) present compelling findings, but for a consensus to be reached, additional studies need to be conducted.

Although a consensus on the best management options for sexual dysfunction related to AI use continues to be debated, what has been established is the importance of assessing, at regular intervals, for symptoms of sexual dysfunction (NCCN, 2015). One study included in this integrative review used the FSFI to measure pre- and postintervention measures of sexual function. The FSFI has been validated in patients with breast cancer and all female cancer survivors as a reliable instrument for measuring sexual dysfunction (Bartula & Sherman, 2015; Baser, Li, & Carter, 2012). The 19-item tool assesses six different domains of sexual functioning: desire, arousal, lubrication, orgasm, satisfaction, and pain; it does not require any additional training to administer or score, making it user friendly for a variety of healthcare professionals (Bartula & Sherman, 2015). The total FSFI score is the sum of scores given to each of the six domains; the maximum score is 36, and high scores indicate better functioning (Baser et al., 2012). The FSFI has drawbacks; it can take 15–20 minutes to complete and fails to incorporate factors unique to cancer populations that may be affecting sexual desire, such as physical and mental impact of disease (Baser et al., 2012). Despite these drawbacks, the FSFI is a validated instrument for use in this unique population, to provide useful information as an objective measurement of a domain which is anything but objective. In addition, the use of this instrument may facilitate further research for baseline and measurement of subsequent interventions designed to improve sexual function. Assessment of sexual functioning is a necessary and important first step in developing strategies to manage related symptoms.

Limitations to this review include the limited number of articles and the limited number of participants in the reviewed articles; both preclude practice-changing conclusions being drawn. Of note, Barton et al. (2007) used a transdermal route of administration as opposed to vaginal; however, the study did include patients with breast cancer and, therefore, adds to this body of knowledge. Because the studies reviewed used compounded creams of testosterone, which are not currently approved by the U.S. Food and Drug Administration (FDA) for use in women, pharmacokinetic data are not available, precluding evaluation of the differences in absorption between the vaginal and transdermal route. Despite limitations, the evidence is promising and should prompt additional investigative efforts by nurse scientists.

As the field of survivorship continues to expand, more institutions are beginning to include sexuality and intimacy as key constructs of survivorship care (Krychman & Katz, 2012). This integrative review seeks to explore an established survivorship problem that should have clear and effective guidelines for symptom management. Evidence presented suggests that vaginal testosterone may be a potential option for improving symptoms related to sexual dysfunction, although inadequate data regarding safety and pharmacokinetics impede clinical application of vaginal testosterone.

RNs and advanced practice RNs (APRNs) are skilled at identifying and managing treatment side effects in the oncology population. Sexual dysfunction can be perceived as a sensitive topic by patients and clinicians. RNs and APRNs, whose training is grounded in holistic care, can often assess and treat a multitude of different symptoms, including sexual dysfunction. Options are currently limited for the treatment of sexual dysfunction in women taking AIs; therefore, further research efforts are needed to identify and develop strategies to manage this side effect.

Vaginal testosterone shows early promise as an alternative to other hormonal agents, such as estrogen, which has historically been used to manage sexual dysfunction outside of the oncology population. Further research of this intervention is needed in patients with breast cancer taking systemic endocrine therapy, such as AIs. Based on findings from Witherby et al. (2011) and Dahir and Travers-Gustafson (2014), either the 150 mcg or 300 mcg vaginal daily dose would be an acceptable dose to examine comparatively in future research investigations.

Sexual dysfunction is a commonly reported side effect of AIs. The number of breast cancer survivors continues to increase, and the role of chemoprevention using AIs continues to expand. Practitioners need to be equipped with strategies to manage sexual dysfunction to minimize the number of women stopping therapy as a result of untoward side effects and improve women’s quality of life. Vaginal testosterone for the management of sexual dysfunction in women taking AIs is a non–FDA-approved therapy that has demonstrated efficacy and safety in small studies. These small studies are limited and lack adequate data to support any practice change. Large-scale studies are needed to validate these early findings.

Share this:
Back to Top ▲
Go to ons.org
Hello [Name]! Close Menu
Quicklinks