Effects of Breathing Exercises on Patients With Lung Cancer

Problem Identification: To evaluate the effects of breathing exercises on dyspnea, six-minute walk distance (6MWD), anxiety, and depression in patients with lung cancer.

Implications for Nursing: Breathing exercises can be considered as a conventional rehabilitation nursing technique in clinical practice, and nurses should be aware of the importance of breathing exercises.

Lung cancer is not only one of the most common malignancies in the world, but it is also the number one cause of cancer-related death in the world (Mao, Yang, He, & Krasna, 2016; World Health Organization [WHO], 2019). In the past few years, the global burden of pulmonary cancer has been increasing, and the disease remains a main threat to public health worldwide (Gouvinhas et al., 2018; WHO, 2019). The treatments for lung cancer are surgery, chemotherapy, and radiation therapy. They aim to cure malignant tumors derived from lung tissue or to relieve the adverse effects (Kim, Boffa, Wang, & Detterbeck, 2012). Surgery is the optimal treatment for precancerous lesions and early- to middle-stage lung cancers (Boffa et al., 2008; Kim, Detterbeck, et al., 2012). However, many patients with advanced lung cancer refuse surgery because of the increased risk of postoperative pulmonary complications and lung function impairment; therefore, they choose chemotherapy, radiation therapy, and other treatment approaches (Baser et al., 2006; Boffa et al., 2008; Kim, Detterbeck, et al., 2012).

Regardless of the type of lung cancer treatment, the development of cancer and the invasion of lung tissue or surrounding tissues by cancer cells can interfere with normal breathing and lead to dyspnea or shortness of breath. In addition, most patients often experience other severe symptoms, such as decreased exercise capacity, anxiety, and depression, which lead to a significant decline in the quality of life (Ha, Ries, Mazzone, Lippman, & Fuster, 2018; Molassiotis, Charalambous, Taylor, Stamataki, & Summers, 2015).

Breathing is vital to maintaining the operation of the body organs and systems. However, surgery and other treatments targeting lungs inevitably present a substantial risk to the respiratory function of patients. The purpose of breathing exercises is to correct the incorrect breathing patterns, reestablish correct breathing methods, increase diaphragmatic activity, elevate alveolar ventilation, reduce energy consumption during the respiration, and ease shortness of breath in patients with lung cancer (Wei et al., 2013).

Several types of breathing exercises are reported in the literature. One of them, inspiratory muscle training (IMT), involves specific breathing exercises for respiratory muscles to improve their strength and, thereby, the respiratory function of lungs (Gosselink et al., 2011). Another approach, abdominal breathing exercises, can improve diaphragmatic descent and ascent during inhalation and exhalation, respectively. The physiological effect is achieved by breathing to sufficient vital capacity and maintaining the breath for three to five seconds to ensure the full expansion of lungs. This helps open the small-volume alveoli and stimulates the production of surfactants (Alaparthi, Augustine, Anand, & Mahale, 2016). Yet another approach, pursed-lip breathing, can prevent the premature closure of small airways and accelerates the discharge of residual gases from the lungs (Dellweg, Reissig, Hoehn, Siemon, & Haidl, 2017; Jones, Dean, & Chow, 2003).

This evidence-based review was conducted in compliance with the PRISMA (Preferred Reporting Items for Systematic Reviews and Meta-Analyses) statement (Liberati et al., 2009).

The authors conducted a systematic literature search of the Cochrane Library, Web of Science, Embase®, PubMed®, Weipu, Wanfang, and Chinese National Knowledge Infrastructure databases for relevant studies included in the databases prior to April 6, 2018.

The following inclusion criteria were applied for the articles in this study:

•  The study is a full-text manuscript published in English or Chinese.

•  The research design is RCT.

•  Patients were diagnosed with lung cancer, or a mixed cancer cohort that included lung cancer was studied.

When the same patient cohorts were reported by two articles, the most recently published study was included.

When the title and abstract indicated that a study potentially may be eligible for inclusion, the full text was obtained and analyzed. The disagreements were resolved by discussion, and, when necessary, a third reviewer was invited to act as a mediator. Two authors extracted variables from the included studies independently. The extracted data included the following:

Relevant information was tabulated in the Microsoft® Excel spreadsheet predesigned for this review. The authors cross-checked the coding sheets, and any discrepancies were settled by discussion and consensus.

Statistical analysis was performed using Review Manager, version 5.3, and Stata, version 12.0. The mean difference (MD) or standardized MD (SMD), with 95% confidence interval (CI), were used to count for continuous outcomes. Forest plots were constructed to clarify the effect size. Cochran’s Q test and I2 test were used to assess the statistical heterogeneity of effects. A random effects model was used when the heterogeneity was significant (I2 > 50%). Otherwise, a fixed effects model was used.

Subgroup analysis: Exercise training was included in some of the interventions in the analysis. To evaluate whether the intervention methods based mainly on breathing training would improve dyspnea and 6MWD, the authors divided patients into two subgroups (the breathing exercises subgroup and the combined breathing exercises with other exercises subgroup) for this meta-analysis. In addition, to assess whether the treatment approaches would influence the results, the authors divided patients into two subgroups (the surgery subgroup and the other treatment approaches subgroup) for the meta-analysis.

Sensitivity analysis: The authors conducted a sensitivity analysis by examining each study to evaluate the stability of the analysis. The merged results before the changes and the adjusted results were compared to seek out the sources of heterogeneity. 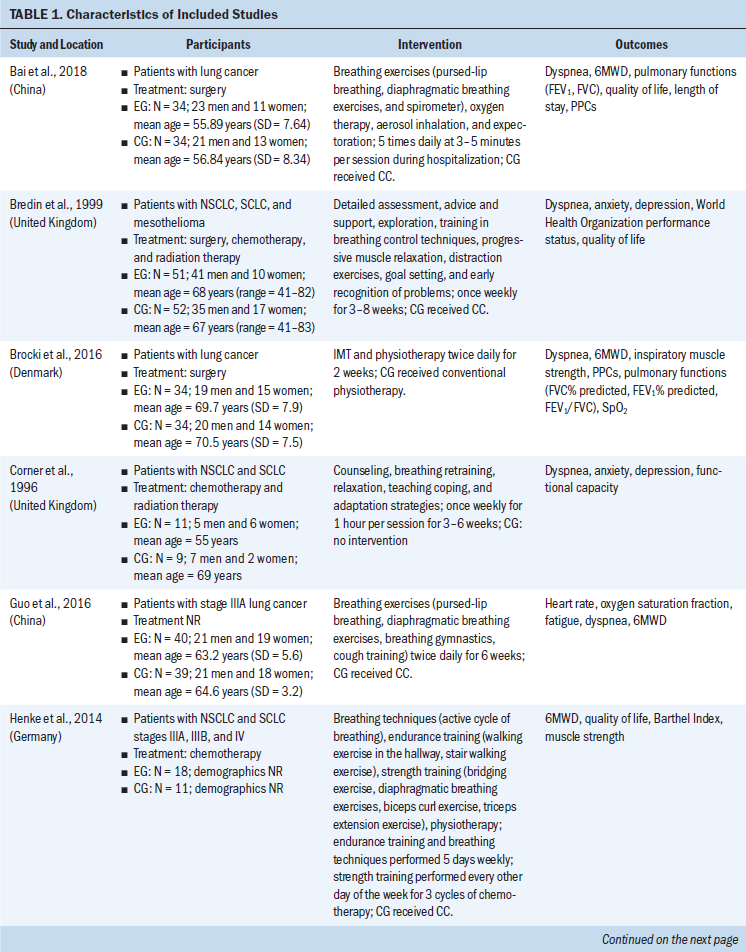 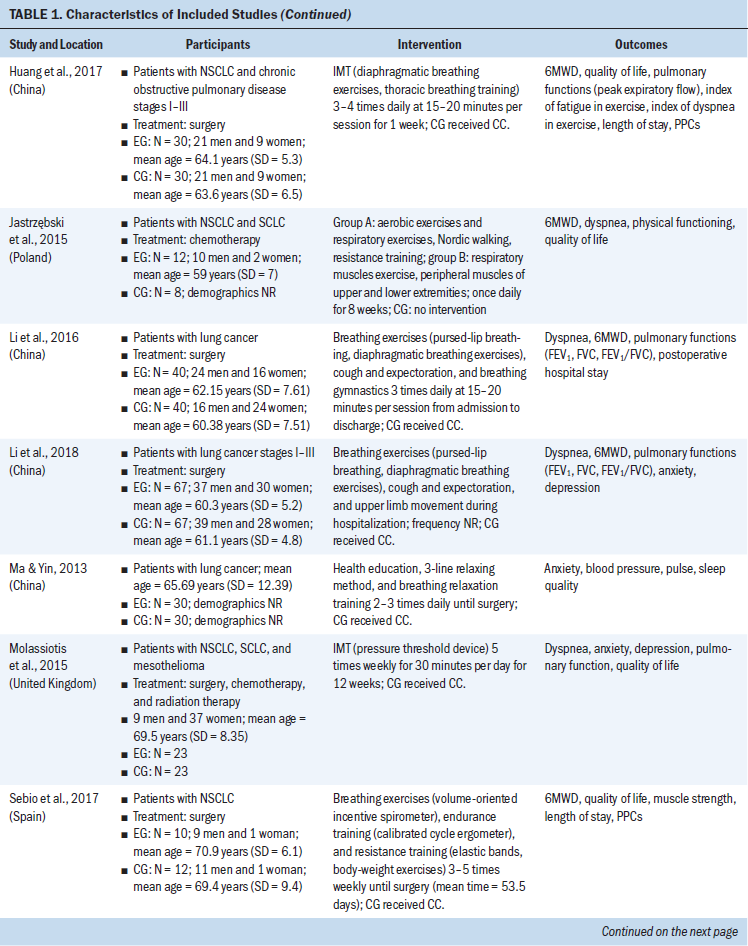 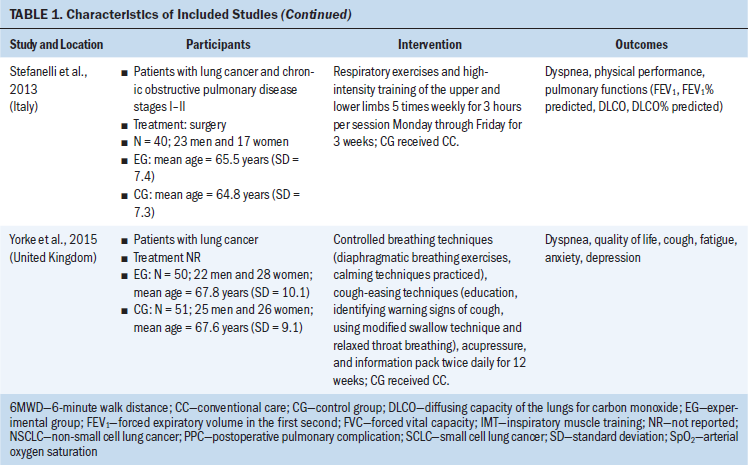 Every included study attempted to randomize the participants into an experimental group and a control group, but some studies did not present the details of the randomization procedures. In addition, the risk of bias in some studies was predominately because of inadequate blinding of patients, therapists, or assessors. Owing to the ambiguity in the allocation concealment and the lack of blinding, the methodologic quality of some studies was poor. The results of the bias risk assessment are summarized in Table 2. 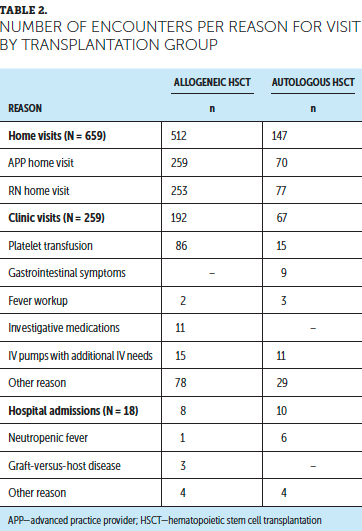 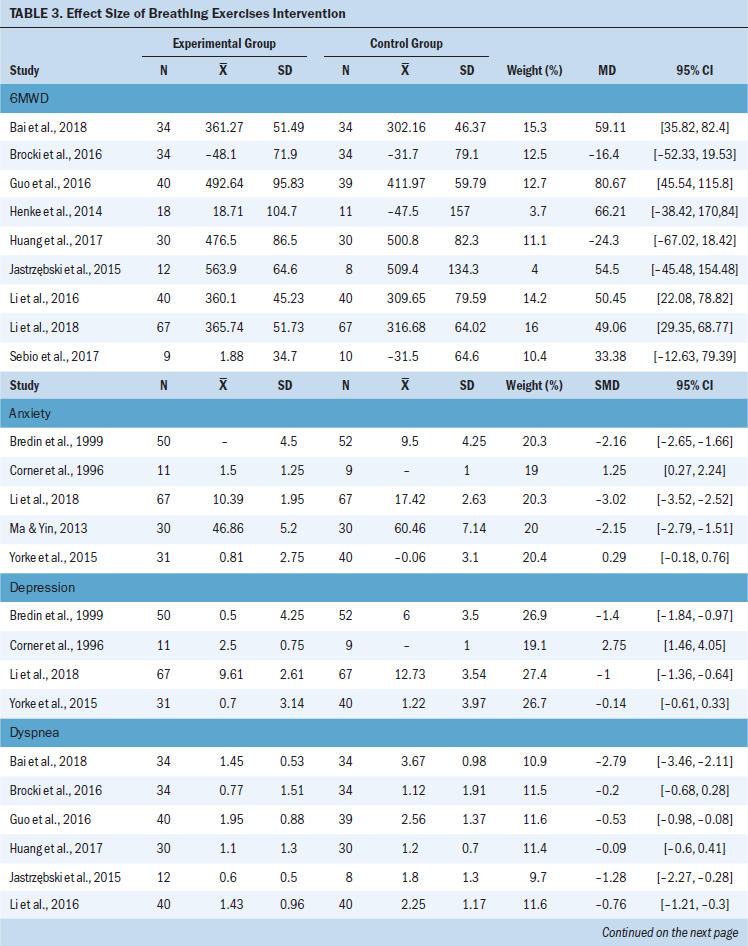 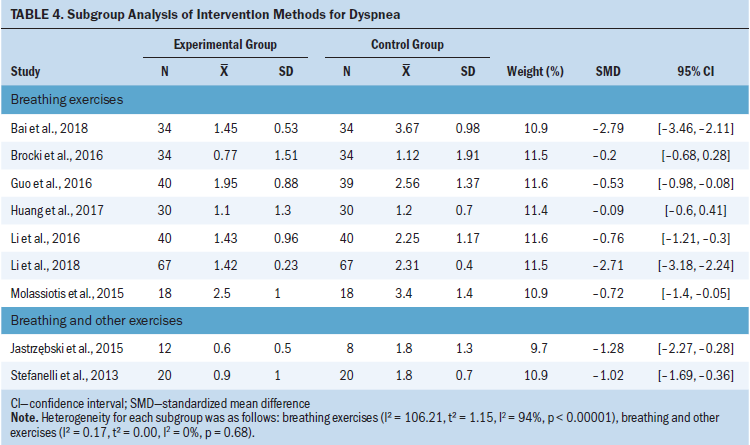 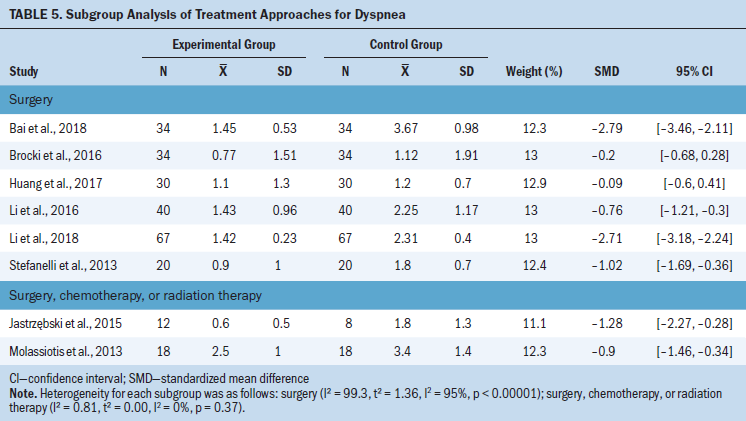 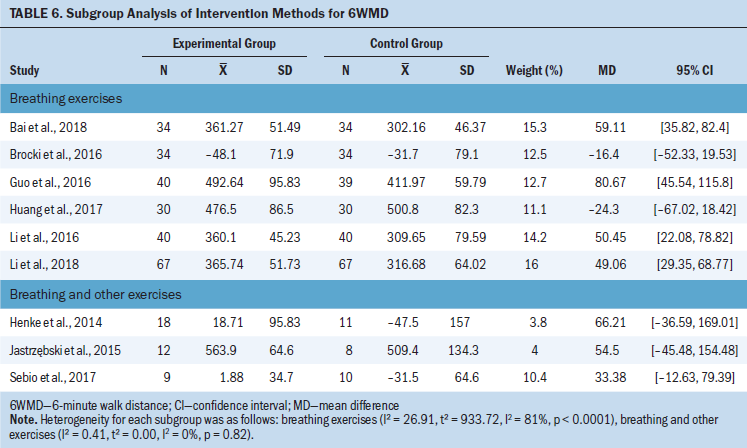 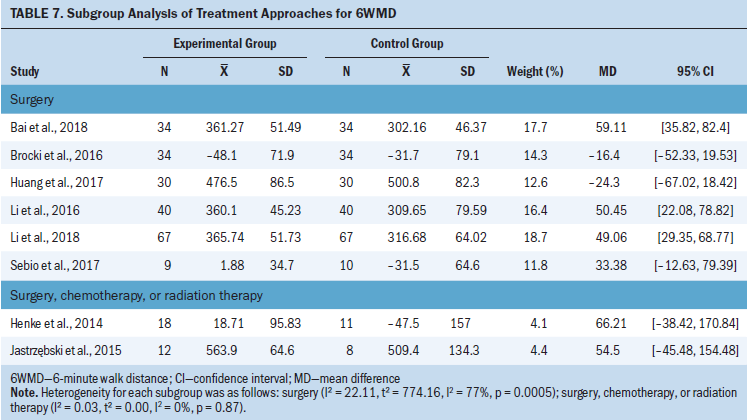 To evaluate the stability and find the sources of heterogeneity of this meta-analysis, the authors performed a sensitivity analysis based on the primary outcome measures. For dyspnea, the heterogeneity significantly decreased (I2 = 41%) when the authors removed two studies (Bai et al., 2018; Li et al., 2016), demonstrating that these studies were the primary source of heterogeneity. In addition, there was a significant difference in the adjusted pooled estimates between the intervention and control groups (SMD = –0.57; 95% CI [–0.85, –0.29]; p < 0.0001). Similarly, the heterogeneity of 6MWD significantly decreased (I2 = 0%) when the authors removed two studies (Brocki et al., 2016; Huang et al., 2017). Still, the adjusted pooled estimates have not changed significantly (MD = 54.75; 95% CI [42.91, 66.59]; p < 0.00001). The sensitivity analysis indicates that the results of this meta-analysis were relatively robust.

All studies included in the review were RCTs. The results of analysis indicate that breathing training can bring many benefits to patients with lung cancer, because they improve dyspnea symptoms and increase 6MWD, even though they did not improve anxiety and depression scores. The previously published meta-analysis (Wei et al., 2013) covered two RCTs and six cohort studies; its results demonstrated that breathing exercises could significantly improve quality of life and the postoperative pulmonary function in patients with lung cancer. Because a small number of RCTs and limited research outcome indicators were used in this meta-analysis, more detailed evaluation of the effects of breathing training on patients with lung cancer is needed.

Because weakened breathing muscles cause dyspnea and reduce exercise capacity, breathing exercises should be regularly used in patients with lung cancer to reduce respiratory distress and improve 6MWD. Dyspnea is a common symptom in individuals with lung cancer in the early and intermediate stages of the disease. In addition, with conservative or aggressive management of pulmonary cancer, most patients with advanced disease usually suffer from dyspnea (Ban et al., 2016). This is an important concern because dyspnea can cause a deleterious effect on the quality of life of patients and their caregivers (Edmonds, Higginson, Altmann, Sen-Gupta, & McDonnell, 2000). Breathing exercises have a long history of research, particularly among patients with poor lung function or chronic obstructive pulmonary disease. There are several types of breathing exercises, such as IMT and abdominal breathing exercises. Other previous studies (Beaumont, Forget, Couturaud, & Reychler, 2018; Gosselink et al., 2011) demonstrated that breathing exercises improve dyspnea symptoms in patients, supporting the authors’ conclusions.

Following the sensitivity analysis based on dyspnea, the authors discovered that two studies (Bai et al., 2018; Li et al., 2016) in the analysis were the sources of heterogeneity. The patients in both studies were all from China, and this may have caused the clinical heterogeneity because of the differences in the research centers and patient acceptance.

It is worth mentioning that breathing exercises may significantly improve 6MWD in the surgery subgroup. In the other treatment approaches subgroup, statistical significance was not reached. One possible reason is that the other treatment approaches subgroup included only two studies, with chemotherapy as a treatment approach. Patients with lung cancer often refuse surgery because of advanced stage of disease or advanced age, instead choosing chemotherapy. The lack of improvement in 6MWD may have occurred because of either the lack of motivation for patients to live a positive life or the reluctance of patients to participate in daily training because of fear of symptom exacerbation. Additional, more detailed studies are needed to clarify this issue.

This review has several limitations. The sample size of 870 patients with lung cancer was smaller than that in other reviews, which could limit analytical power. Many influencing factors could have given rise to clinical heterogeneity, such as diversities in the characteristics of interventions, controls, and the participants. The quality of studies and the differences in the research designs also could have resulted in methodologic heterogeneity. The authors did not assess lung function, pain, and long-term outcomes in the patients. These questions can be addressed in future studies. On account of differences in the interventions, it is unclear which of the interventions were specifically accountable for overall effect. Further research will need to be performed to investigate this question. Some studies had low methodologic quality, which was largely attributed to the inadequate blinding of patients, therapists, or assessors, and the inability to blind personnel and participants to the breathing exercise interventions. Sham breathing exercises can be used in future trials to blind participants, thereby improving methodologic quality. More research may be required to address this question. 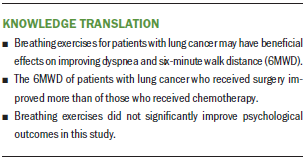 The analysis found that breathing exercises for patients with lung cancer may significantly improve dyspnea symptoms and increase 6MWD. No difference was observed in anxiety and depression scores between the experimental and control groups. Breathing exercises are effective treatment approaches and could be considered as a conventional rehabilitation nursing technique for patients with lung cancer in clinical practice.

Xin Liu, MD, and Ya-Qing Wang, MD, are graduate students and Jiao Xie, PhD, is an associate professor, all in the School of Nursing at Jilin University in China. No financial relationships to disclose. Liu and Wang provided the analysis. Xie contributed to the conceptualization and design. Liu completed the data collection. Wang provided statistical support. Liu and Xie contributed to the manuscript preparation. Xie can be reached at 1761458270@qq.com, with copy to ONFEditor@ons.org. (Submitted September 2018. Accepted November 5, 2018.)

Molassiotis, A., Charalambous, A., Taylor, P., Stamataki, Z., & Summers, Y. (2015). The effect of resistance inspiratory muscle training in the management of breathlessness in patients with thoracic malignancies: A feasibility randomised trial. Supportive Care in Cancer, 23, 1637–1645.