Sample & Setting: The sample was recruited from a hospital bone marrow unit and caregiver support organizations. It included 60 informal cancer caregivers (52% partners) of individuals with cancer who provided care for a median of 27.5 hours per week for 12 months, and 46 noncaregiver participants.

Implications for Nursing: Given that RNT is related to depressive symptoms and cortisol, connecting cancer caregivers who experience RNT to resources and the development and evaluation of brief nurse-led interventions to reduce RNT in informal cancer caregivers seems warranted.

According to the National Alliance for Caregiving (2016), more than 2.8 million family members and friends provided care for individuals with cancer in the United States in 2015. With this prevalence, cancer is one of the most common health issues requiring informal caregiving (Aoun, 2004). In addition, cancer can require years of caregiving, and, in many cases, caregiving can become equivalent to a full-time job (mean = 31.8 hours per week, SD = 34.46 hours) (Kim & Schulz, 2008).

Although patterns may vary based on stress or mental health condition, heightened stress among caregivers is also reflected at the physiologic level, such as elevated cortisol levels (Allen et al., 2017). Elevated levels of cortisol are important because cortisol is related to depression (Burke, Davis, Otte, & Mohr, 2005) and is a risk factor for cardiovascular disease (CVD) (Hamer, Endrighi, Venuraju, Lahiri, & Steptoe, 2012; Hamer, O’Donnell, Lahiri, & Steptoe, 2010). However, as Park, Ross, Klagholz, and Bevans (2018) argued in their review, the use of biomarkers in cancer caregiver research is underdeveloped. This is problematic because the integration of biomarkers into informal caregiver research provides a more comprehensive assessment of an individual’s health (Corwin & Ferranti, 2016). Data examining the effects of caregiver stress on psychological and physiological functioning may contribute to interventions that address heightened rates of poor mental and physical health outcomes in this population.

Although caregiving for patients with chronic health issues is stressful, the psychological stress associated with cancer caregiving is even higher than caregiving for individuals with other health issues (e.g., dementia, diabetes, frailty/older age) (Bevans et al., 2016; Kim & Schulz, 2008). Therefore, identifying modifiable factors associated with health outcomes of cancer caregiver stress is crucial for caregivers. However, as Fitzell and Pakenham (2010) posited, although the negative impact of informal cancer caregiving is clear, research has focused much less on modifiable factors. 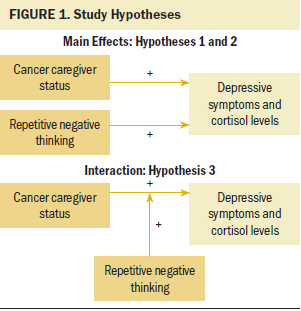 This pilot study examined the relationship between informal cancer caregiving and repetitive negative thinking with depressive symptoms and cortisol levels. Given that this was a pilot study, no a priori power analyses were conducted. The informal caregiver group consisted of 60 caregivers of individuals with cancer. Recruitment efforts included in-person requests at the bone marrow unit of the University of Louisville Hospital in Kentucky (n = 34, 57%,), email invitations to a local cancer support organization (n = 14, 23%) and members of a caregiver support group at the University of Louisville James Graham Brown Cancer Center (n = 9, 15%,), and Listserv announcements to the University of Louisville community (n = 3, 5%). The 46 noncaregiver control group participants were recruited using Listserv announcements to the University of Louisville community. The demographics of both groups are presented in Table 1. The mean age of the informal caregivers was 51.17 years (SD = 15.22, range = 19–77 years), and the mean age of the noncaregivers was 36.61 years (SD = 12.8, range = 22–66 years). No significant differences between the informal caregiver group and the noncaregiver control group were found for race/ethnicity (chi-square[3] = 4.21, p = 0.24) and income (chi-square[7] = 11.84, p = 0.106). However, caregivers were significantly older (t[104] = 5.22, p < 0.001) and more likely female (chi-square[1] = 10.18, p = 0.001). 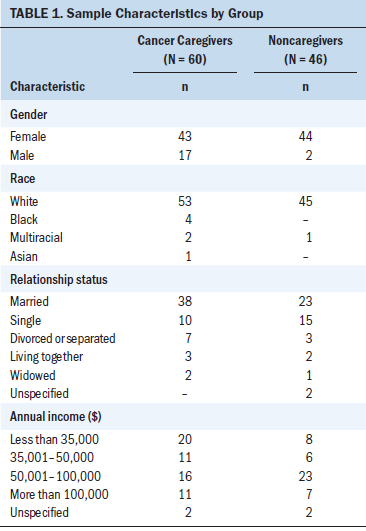 Repetitive negative thinking: The 15-item Perseverative Thinking Questionnaire (PTQ) measures the degree to which individuals engage in repetitive negative thinking (Ehring et al., 2011). Participants responded to items (e.g., “The same thoughts keep going through my mind again and again”) using a five-point Likert-type scale ranging from 0 (never) to 4 (almost always). Items were summed to calculate a total score. Higher scores reflect greater levels of repetitive negative thinking. Previous research has found evidence of convergent validity for the PTQ with measures of rumination (r = 0.82) and worry (r = 0.7) and predictive validity with measures of depressive (r = 0.54) and anxiety (r = 0.64) symptoms (Ehring et al., 2011). In addition, reliability coefficients in prior samples have been good, with internal consistency ranging from a Cronbach alpha of 0.94–0.95 (Ehring et al., 2011); these values are comparable to internal consistency shown in the current sample (alpha = 0.95).

Depressive symptoms: The 20-item Center for Epidemiologic Studies Depression Scale (CES-D) measures depressive symptoms during the past week (Radloff, 1977). Participants responded to items (e.g., “I felt lonely”) using a four-point Likert-type scale ranging from 0 (rarely) to 3 (most of the time). The items were summed to calculate a total score. Higher scores reflect greater levels of depressive symptoms. The Cronbach alpha of the CES-D in a previous caregiver study was 0.9 (Carter & Chang, 2000), which is consistent with the internal consistency in the current study (alpha = 0.91).

Cortisol: Saliva samples were collected from 4 pm to 6 pm. The passive drooling method was used for collecting a single whole saliva sample during a period of five minutes while the participants responded to the survey questions. Saliva was collected in Salivette® sampling devices and kept frozen until analyzed. Salivary cortisol was measured using the salivary cortisol electrochemiluminescence immunoassay (ELISA) kit. The assay is based on a competitive ELISA method. The minimal detectable concentration of the method is 0.007 mcg/dl. The intra- and inter-assay coefficient of variations are 3%–7% and 3%–11%, respectively.

To be able to calculate proposed interaction effects, the authors z-transformed the PTQ scores and then calculated the group (noncaregiver participants = 0 versus cancer caregiver = 1) by z-transformed PTQ scores interaction scores. Using these scores as predictors, the authors calculated one linear regression model with depressive symptoms and one with cortisol as outcome variables. None of the previously listed demographic variables that were found in the literature as potentially affecting cortisol levels (e.g., allergies, caffeine, date of last period, gum bleeding, hormones, shift work, smoking) were correlated in the current sample. Because age and gender were significantly different between cancer caregivers and noncaregiver control participants, the authors included those variables as covariates in both regressions. Control variables were entered in step 1 of the regressions. To test the hypothesis that repetitive negative thinking is associated with more depressive symptoms and higher levels of cortisol, the main effects of group and z-transformed PTQ scores were entered as predictors in step 2. In step 3, the group by z-transformed PTQ scores interaction was entered to test for the hypothesis that repetitive negative thinking moderates the association between stress and depressive symptoms and cortisol level. To further examine significant group by repetitive negative thinking interaction effects, the authors constructed model-implied graphs. 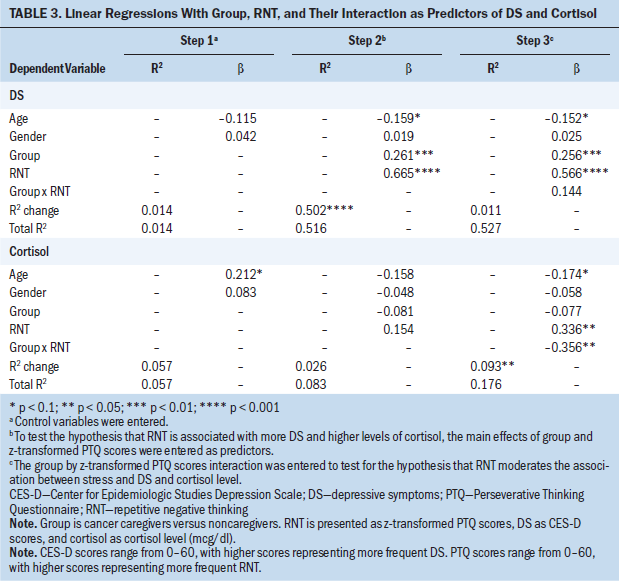 When discussing potential implications of this study, some limitations should be considered. The discussion of future studies already highlighted one limitation of the study: The cross-sectional design prevented the authors from examining mediation effects. Therefore, authors of future studies may want to follow the previously mentioned suggestions and use a three-wave longitudinal design. Another limitation of the current study is that participants in both samples largely identified as female (more than 70%) and White (more than 85%). Because some studies suggest mental and physical differences regarding distress depending on gender and race/ethnicity (Girgis et al., 2013; Martin et al., 2012), future studies should include more men and racially/ethnically diverse samples to be more generalizable or to examine the potential moderating effects of both sociodemographic variables.

The outcomes of the current study are limited to depressive symptoms and salivary cortisol. Depression is relevant because of its prevalence in as many as 53% of cancer caregivers (Girgis et al., 2013), and cortisol is a widely used biomarker of the stress response (Allen et al., 2017) because of its association with physical disease such as CVD (Hamer et al., 2010, 2012). However, cancer caregiving and repetitive negative thinking are associated with other mental health issues, including PTSD (Seligowski et al., 2015), and inflammatory markers, such as interleukin-6 and C-reactive protein (Segerstrom et al., 2008; Zoccola, Figueroa, Rabideau, Woody, & Benencia, 2014). Therefore, the sole inclusion of depressive symptoms and salivary cortisol may be seen as limitations of the current study, and authors of future studies may want to consider further examining mental health outcomes and biomarkers. 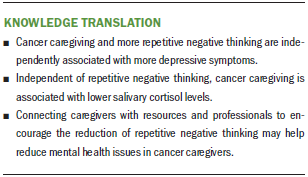 Patrick Pössel, Dr. rer. soc., is a professor, Amanda M. Mitchell, PhD, is an assistant professor, and Brooks Harbison, MA, is a doctoral student, all in the Department of Counseling and Human Development; and G. Rafael Fernandez-Botran, PhD, is a professor in the Department of Pathology and Laboratory Medicine, all at the University of Louisville in Kentucky. No financial relationships to disclose. Pössel and Mitchell contributed to the conceptualization and design. Mitchell, Harbison, and Fernandez-Botran completed the data collection. Pössel and Fernandez-Botran provided the analysis. Pössel, Mitchell, and Harbison contributed to the manuscript preparation. Pössel can be reached at patrick.possel@louisville.edu, with copy to ONFEditor@ons.org. (Submitted March 2019. Accepted May 27, 2019.)

Aoun, S. (2004). The hardest thing we have ever done: The social impact of caring for terminally ill people in Australia 2004. Deakin West, ACT: Palliative Care Australia.

National Alliance for Caregiving. (2016). Cancer caregiving in the U.S.: An intense, episodic, and challenging care experience. Retrieved from http://www.caregiving.org/wp-content/uploads/2016/06/CancerCaregivingRe…