Objectives: To describe the prevalence of and the association between patient-reported dysphagia and psychological distress (anxiety and depression) in head and neck cancer (HNC) survivors.

Implications for Nursing: Oncology nurses can inform their daily practice by implementing regular assessments for anxiety and depression in HNC survivors reporting symptoms of dysphagia.

Head and neck cancer (HNC) generally originates in the squamous cells of the upper aerodigestive tract. The most common sites include the oral cavity, pharynx, and larynx (National Cancer Institute [NCI], 2021). HNC diagnoses comprise about 4% of total cancer diagnoses in the United States, and more than 70% of those diagnosed are men (NCI Surveillance, Epidemiology, and End Results Program, 2021; Siegel et al., 2020). Treatment for early-stage HNC commonly includes either surgery or radiation therapy. However, about 60% of patients are diagnosed with advanced disease, which is typically categorized by a larger primary tumor volume, metastases to the regional lymph nodes, or a combination of both (Chow, 2020). The treatment method for advanced stage carcinoma is often multimodal, including a combination of radiation therapy, chemotherapy, and/or surgery (Marur & Forastiere, 2016).

HNC and its treatment can contribute to high symptom burden, which can interfere with patients’ daily activities (Gunn et al., 2013; Hanna et al., 2015). About one-third of patients with HNC present to treatment with high symptom burden, with the most severe symptoms reported being pain, fatigue, distress, and insomnia (Hanna et al., 2015). Patients undergoing concurrent chemotherapy and radiation therapy are more likely to experience a higher symptom burden than patients undergoing radiation therapy alone (Rosenthal et al., 2014). Because of the routine use of multimodal therapy, substantial side effects are common. The most prevalent toxicities include fibrosis of the head and neck region, xerostomia, dysgeusia, psychological distress, pain, and dysphagia (Astrup et al., 2015; Haisfield-Wolfe et al., 2009; Nilsen et al., 2019; Villa & Sonis, 2016).

Dysphagia, or swallowing dysfunction, is a medical condition in which individuals have difficulty safely or efficiently advancing solids or liquids from the oral cavity to the stomach (Rommel & Hamdy, 2015). Commonly described during and after treatment, dysphagia is one of the most devastating side effects related to HNC treatment, and it is associated with increased morbidity and mortality (Rommel & Hamdy, 2015). Swallowing dysfunction can cause coughing or choking during meals, may lead to aspiration pneumonia, and could necessitate alternate feeding methods (e.g., feeding tube). These consequences may contribute to psychosocial distress, such as embarrassment, isolation, and symptoms of psychological distress, including anxiety, depression, and decreased quality of life (El-Deiry et al., 2009; Rommel & Hamdy, 2015). According to a Surveillance, Epidemiology, and End Results–Medicare analysis that explored the two-year prevalence of dysphagia among 16,194 patients with HNC, the incidence of dysphagia was as high as 45.3% (Hutcheson et al., 2019). Prevalence has increased by about 11.7% during the previous decade (Hutcheson et al., 2019). Considering these data, dysphagia presents a very large symptom burden among HNC survivors.

A cross-sectional analysis of adult (aged 18 years or older) HNC survivors was conducted between October 2018 and January 2020. As a part of their clinical evaluation in the outpatient, interprofessional University of Pittsburgh Medical Center Head and Neck Cancer Survivorship Clinic in Pennsylvania, each survivor completed patient-reported outcomes questionnaires regarding swallowing dysfunction and symptoms of anxiety and depression. All participants provided informed consent to be included in various research studies regarding HNC survivorship through the interprofessional clinic. To be included in this analysis, survivors had to be at least one year postcompletion of primary treatment for squamous cell carcinoma of the oral cavity, oropharynx, or larynx/hypopharynx. Survivors were excluded from the study if they had a history of recurrence, second primary cancer, or distant metastases. Figure 1 illustrates the CONSORT (Consolidated Standards of Reporting Trials) flow diagram for this study. 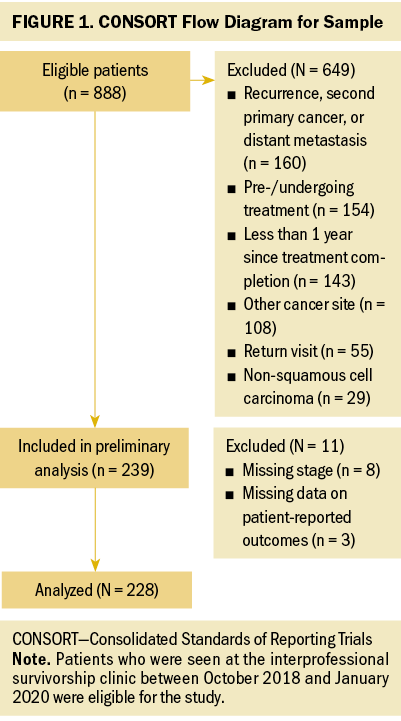 Patient-reported symptoms of dysphagia were measured using the 10-item Eating Assessment Tool (EAT-10). Each question has five response options ranging from 0 (no problem) to 4 (severe problem). The questions address swallowing-related weight loss, going out for meals, difficulty with consistencies (i.e., liquids, solids, and pills), pain, the pleasure of eating, food sticking, and coughing. EAT-10 scores are calculated by summing scores on each of the 10 questions, with a total minimum score of 0 and a maximum score of 40. A score of 3 or higher is indicative of disordered swallowing (Belafsky et al., 2008). The EAT-10 questionnaire has established reliability and validity (Belafsky et al., 2008), with substantial use as a patient-reported outcome measure in individuals with HNC (Arrese et al., 2017; Cates et al., 2021; Florie et al., 2021; Likhterov et al., 2018).

Symptoms of anxiety were measured using the Generalized Anxiety Disorder–7 (GAD-7), which assesses symptoms of anxiety during the past two weeks. The GAD-7 consists of seven questions, each with four response options ranging from 0 to 3 (0 = not at all, 1 = several days, 2 = more than half the days, and 3 = nearly every day). Question domains include feelings of nervousness or anxiousness, uncontrollable worrying, worrying about different things, trouble relaxing, restlessness, being easily annoyed or irritable, and feeling afraid of something horrible happening. Total scores are calculated by summing all responses, with total scores ranging from 0 to 21. Scoring is interpreted as follows: a score of 0–4 indicates minimal anxiety, a score of 5–9 indicates mild anxiety, a score of 10–14 indicates moderate anxiety, and a score of 15–21 indicates severe anxiety (Anxiety and Depression Association of America, 2020). The GAD-7 had been noted to be psychometrically sound (Plummer et al., 2016) and has been used as a screening measure for generalized anxiety in cancer populations (Esser et al., 2018; Naser et al., 2021; Sarkar et al., 2015).

The Patient Health Questionnaire–8 (PHQ-8) was used to measure symptoms of depression during the past two weeks among survivors. The PHQ-8 consists of eight questions, each scored on a scale ranging from 0 to 3 (0 = not at all, 1 = several days, 2 = more than half the days, 3 = nearly every day). Total scores range from 0 to 24. A total score of 5–9 represents mild depressive symptoms, a score of 10–14 represents moderate symptoms, and a score of 15–24 represents severe depressive symptoms (Shin et al., 2019). The PHQ-8 covers topics, such as pleasure in doing things, feeling down or hopeless, irregular sleeping patterns, feeling tired, irregular eating patterns, feeling bad about oneself, trouble concentrating, and moving too slow or too fast. Previous research supports the usefulness of the PHQ-8 as a screening measure for depression (Kroenke et al., 2009; Smith et al., 2010), with good sensitivity and specificity (Wu et al., 2020).

All statistical analyses were performed using RStudio, version 1.3.1056. In the descriptive analysis, means and standard deviations were computed for continuous variables, and frequencies and percentage were calculated for categorical variables. Regarding the two outcomes of interest (GAD-7 and PHQ-8 scores), overall means, standard deviations, frequencies, and percentages are reported. Scores were categorized into three groups based on the following criteria:

In the univariate analysis and the linear regression analysis, GAD-7 and PHQ-8 scores were treated as continuous variables.

Differences in GAD-7 scores by categorical demographic and clinical characteristics were examined using the Kruskal–Wallis test, and similar tests were performed for PHQ-8 scores. Linear regression analysis was performed to investigate the association between GAD-7 and EAT-10 scores while controlling for treatment modality, age, and stage. A similar linear regression model was fitted to examine the association between PHQ-8 and EAT-10 scores. Sandwich variance estimator was used to estimate the standard errors for both models. 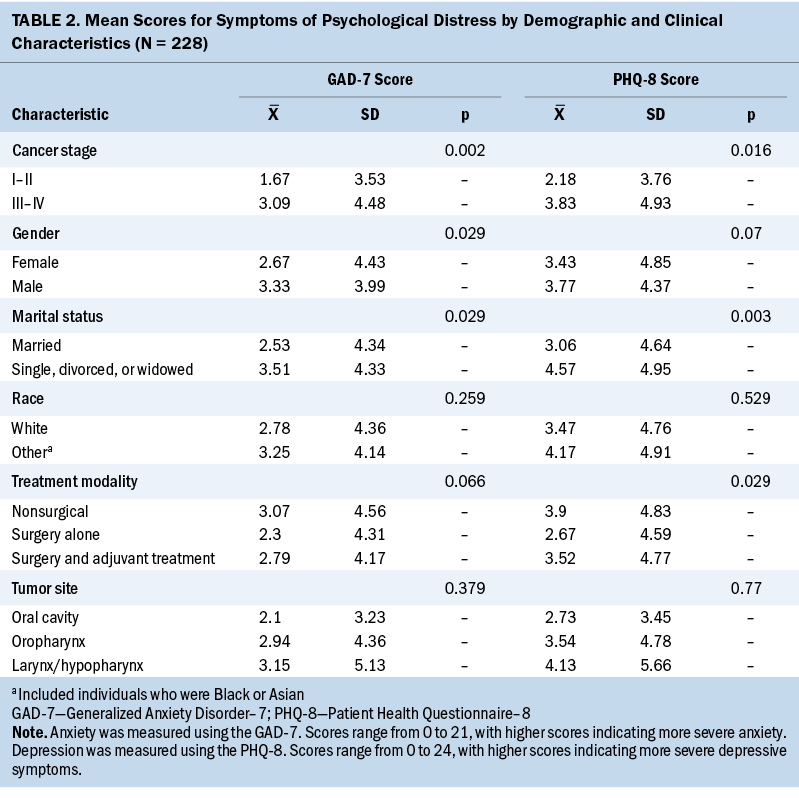 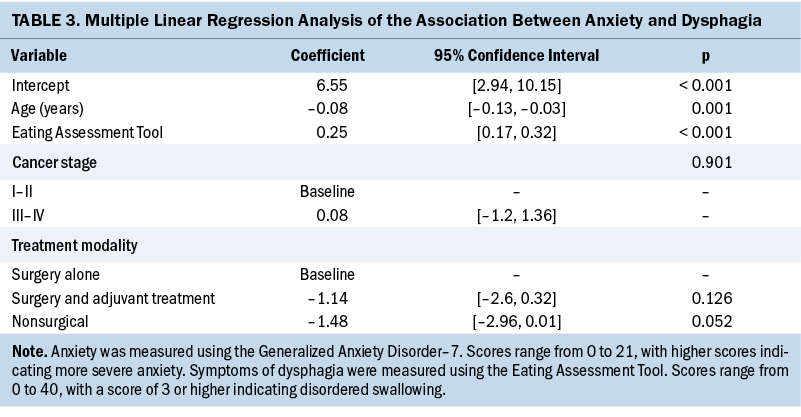 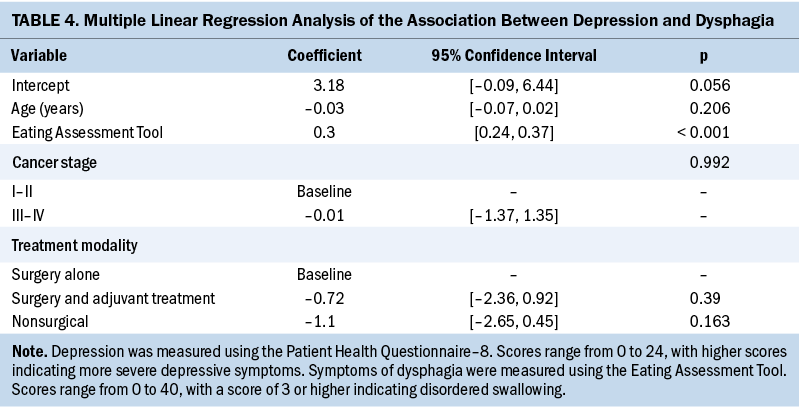 Dysphagia is a common side effect of HNC and its treatment (Kronenberger & Meyers, 1994; Murphy & Gilbert, 2009). Many studies have shown that patients with HNC experience a particularly high rate of dysphagia (23%–100%) compared to other patients in the oncology and general populations (1%–13%) (García-Peris et al., 2007; Roden & Altman, 2013). In the current study, 70% (n = 159) of HNC survivors reported symptoms of dysphagia using the EAT-10. Comparatively, the prevalence of dysphagia in the general population ranges from 1.7% to 11.3% depending on varying demographic information (Roden & Altman, 2013). In one study of outcomes related to dysphagia in 104 patients with HNC, swallowing dysfunction was associated with decreased quality of life (Nguyen et al., 2005). In the same study, it was reported that patients with no or mild dysphagia experienced significantly less anxiety and depression than those with moderate to severe dysphagia (p = 0.005 and p = 0.0001, respectively), which is consistent with the results of the current study (Nguyen et al., 2005). These results were attained based on anxiety and depression evaluations using the University of Washington Quality of Life Questionnaire (Nguyen et al., 2005). To the authors’ knowledge, the current study is the largest cross-sectional analysis exploring the association between swallowing dysfunction and symptoms of anxiety and depression in HNC survivors.

This study has some limitations. Because the obtained data were cross-sectional, no causal association between patient-reported symptoms of dysphagia and psychological distress can be inferred. Therefore, future studies would benefit from a longitudinal approach, which would allow for the evaluation of a cause-and-effect relationship, as well as provide information about individuals’ symptoms over time. In addition, the self-report questionnaires for dysphagia, anxiety, and depression are designed to screen for symptoms, not diagnosis conditions. Because of the design of this specific interprofessional HNC survivorship clinic, it could be true that some patients had a more complex symptom and treatment profile than others, which may have introduced bias. Lastly, because the sample was obtained at one specific clinic, the patients were racially homogeneous. Future studies should acquire a racially diverse sample to better explore the influence of race on these variables.

Oncology practitioners can implement early screening and intervention for psychological distress, such as anxiety and depression, for HNC survivors reporting symptoms of dysphagia. According to a study by Naughton and Weaver (2014), the first one to three years after cessation of treatment are the most critical for a cancer survivor’s mental health, so early action is essential. It is known that anxiety and depression are significant symptoms in the HNC community and that patients with HNC report suicide rates that are significantly higher than in the general population (Kam et al., 2015). Based on the results of the current study, HNC survivors who report symptoms of dysphagia are more likely to also report symptoms of anxiety and depression. Therefore, it is vital that oncology nurses inform their daily practice and implement regular monitoring and assessment for signs and symptoms of anxiety, depression, and suicidal ideations in HNC survivors who report these symptoms. Future studies can be conducted regarding which method of intervention is best for addressing mental health in HNC survivors. When treating individuals who are struggling with symptoms of anxiety and depression, oncology nurses should be empowered to provide the patient with the necessary resources to obtain interventions, such as cognitive behavioral therapy, mindfulness therapy, and/or medication, as needed. In addition, basic psychological care should be implemented into the care plan of all HNC survivors who are experiencing dysphagia. Attention must be brought to the psychological complications associated with this common post-treatment side effect. 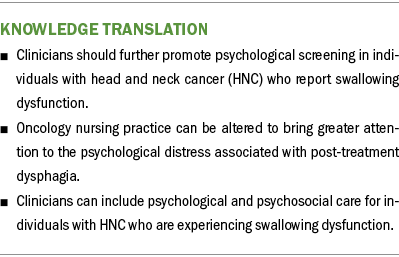 This study demonstrated that patient-reported swallowing dysfunction is significantly associated with increased symptoms of anxiety and depression. The results provide the means to execute a system-level adoption of psychological screening in HNC survivors who report symptoms of dysphagia. Doing so would help practitioners to evaluate and care for symptoms of anxiety and depression early for the benefit and well-being of patients. Further prospective research is needed to replicate these results and to better understand the effects of swallowing dysfunction on mental health among HNC survivors.

The African Caribbean Immigrant Cancer Survivor Experience in the United States: A Scoping Review of the Literature

Effectiveness, Safety, and Tolerance of Scalp Cooling for Chemotherapy-Induced Alopecia

Share this:
Back to Top ▲
Go to ons.org
Hello [Name]! Close Menu
Quicklinks