Objectives: To determine the relative predictive validity of personality and spirituality for mental health and salivary alpha-amylase (sAA) in breast cancer (BC) survivors.

Sample & Setting: 23 BC survivors participated in a single-group, cross-sectional study.

Implications for Nursing: Nurses should be aware of BC survivors’ personality characteristics and spiritual dispositions so that distinct interventions can be offered to promote mental health and reduce stress-related neuroimmune inflammation.

Psychoneuroimmunology theorists posit that the brain’s perception of stress is filtered through behavioral and psychosocial-spiritual variables (e.g., personality, spirituality) and communicated to the immune system via neuroimmune pathways, which results in a state of well-being or disease (Ader & Cohen, 1975; Lutgendorf & Costanzo, 2003). In short, during acute stress, the sympathetic-adrenal-medullary axis activates the sympathetic nervous system to release norepinephrine, which induces the fight-or-flight response. Following sympathetic nervous system activation, the hypothalamic-pituitary-adrenocortical axis releases endocrine-based hormones, including cortisol, which activate inflammatory protein cellular messengers (i.e., cytokines) (McEwen, 1998). The prolonged cortisol release that occurs with chronic stress is associated with dysregulation of immune cytokines such as interleukin-6, which is linked to greater susceptibility to disease and mortality (Kiecolt-Glaser et al., 2003).

Spiritual variables refer to an individual’s emotional connection to a divine or higher power (e.g., beliefs in a loving higher power) (Johnstone, Franklin, et al., 2008). Differentiating religious and spiritual constructs is challenging because of overlapping definitions (e.g., searching for the divine). Discussions regarding the distinctions between religious versus spiritual constructs are well described in the extant literature and are beyond the scope of this article.

Personality is described by the Five-Factor model (also called the Big Five model), which features five dimensions: (a) neuroticism, tendency toward worries and negative affect, (b) extraversion, preference for social engagement, (c) openness, receptivity to new experiences, (d) agreeableness, sympathy toward others, and (e) conscientiousness, tendency to be responsible (McCrae & Costa, 2010). Previous data suggest that personality traits are primary predictors of health outcomes and that behavioral patterns and worldviews influence overall health (Vollrath, 2006).

Few studies have examined the association between personality and psychoneuroimmunologic variables in BC survivors. In their feasibility study, Hulett et al. (2018) determined that BC survivors were not burdened by the addition of an exploratory aim to evaluate the hypothesis that personality and spirituality are associated with better mental health, physical health, and neuroimmune activity. Therefore, participants who enrolled during the latter half of the rolling recruitment period (n = 23) were invited to complete a personality inventory. This article reports the associations among personality traits, spiritual variables, mental and physical health outcomes, and neuroimmune biomarkers in the sample subset of 23 BC survivors.

The sample (N = 23) is based on a previous feasibility study (single-group, cross-sectional design) (Hulett et al., 2018). The study was approved by the University of Missouri Institutional Research Board and conducted by the Sinclair School of Nursing in collaboration with Ellis Fischel Cancer Center. Participants provided informed consent. Given the rural, Midwestern demographic, participants were offered a mail-back option for completing self-report measures to minimize travel burden. Salivary specimens were self-collected in participants’ home settings. To reduce the risk of confounding influences of treatment-related neuroimmune changes, adult women at least three months post-BC treatment were included in the study. Exclusion criteria included acute illness, steroid medication use, nicotine use, recreational drug misuse, and oral inflammation. Complete details from the parent study are reported in Hulett et al. (2018).

Personality: The NEO Five-Factor Inventory-3 is a 60-item measure of the five domains of personality: neuroticism, extraversion, openness, agreeableness, and conscientiousness (McCrae & Costa, 2010). For the five personality domains, Cronbach’s alpha ranges from 0.79 to 0.91 (Johnstone et al., 2012). A higher score for any given personality characteristic indicates a higher level of that characteristic.

Participants were given verbal and written instructions for the self-collection of passive drool salivary specimens. Specimens were collected three times per day for two consecutive days at the three diurnal timepoints of awakening, 30–45 minutes after awakening, and evening (bedtime). The collection protocol instructed on oral intake, oral hygiene, physical activity two hours before collection, and cold storage and transport to the laboratory. BC survivors were provided with commercial sAA enzymatic kits and protocol from Salimetrics for testing sAA. Details of the enzyme immunoassay procedures and sAA parameter reporting can be found in Hulett et al. (2020).

Concentrations of sAA demonstrated positive skewness on a histogram and Shapiro-Wilk testing (p < 0.01); therefore, sAA values were logarithmically transformed for statistical analyses. IBM Statistics SPSS software version 26 was used to perform statistical analyses, including descriptive statistics and correlations. Hierarchical regressions were conducted to explore associations between personality, spiritual variables, SF-36v2® health variables, and sAA. Statistical significance for all analyses was set at < 0.05. Because of the small sample size, statistical analyses were limited to one personality predictor (i.e., conscientiousness) and one spirituality predictor (i.e., forgiveness), based on Pearson’s correlation findings and data from previous studies that showed both conscientiousness and forgiveness are associated with health outcomes (Hulett et al., 2021; Johnstone et al., 2012). The neuroimmune biomarker sAA, was selected for hierarchical regression analysis based on previous findings that the association between sAA and forgiveness is statistically significant (Hulett et al., 2021). 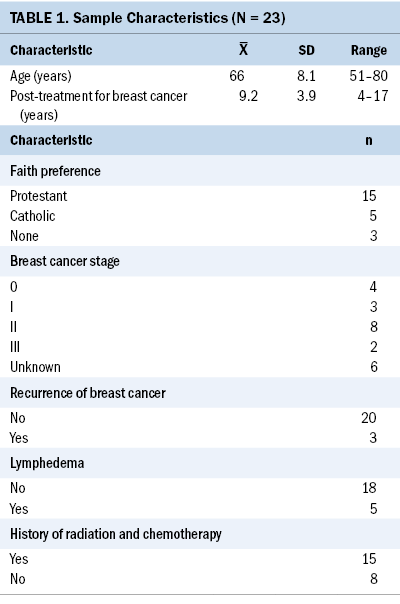 Descriptive statistics are presented in Tables 1 and 2. Pearson correlations between personality traits and demographics, spiritual variables, and physical and mental health are presented in Table 3. Spearman’s rho correlations between personality traits and sAA were not statistically significant; however, a near statistical significance was observed between neuroticism and sAA (rs = –0.34, p = 0.11) and between conscientiousness and sAA (rs = 0.37, p = 0.09). 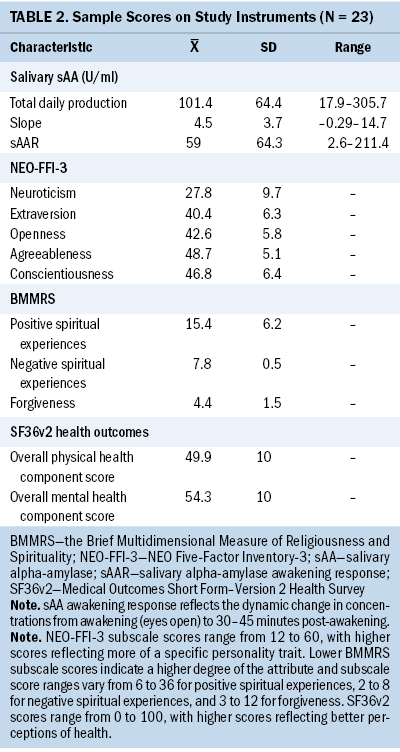 For each hierarchical regression, the first regression examined the degree to which the personality trait (i.e., conscientiousness) predicted a given outcome (i.e., mental health, sAA). The second regression determined the degree to which the spiritual variable (i.e., forgiveness) significantly predicted the given outcome after considering personality. The normal assumptions of multicollinearity, normal probability plots, and residual statistics were met.

The results from this pilot study indicate that personality (i.e., conscientiousness) and spirituality (i.e., forgiveness) independently predict subjective and objective health (i.e., mental health and sAA) in BC survivors, providing important information regarding the psychoneuroimmunologic variables that influence BC survivorship. Personality is a stronger predictor of mental health than spirituality, a finding that supports earlier studies (Johnstone et al., 2012; Lockenhoff et al., 2009). Specifically, less neuroticism, greater extraversion, and greater conscientiousness are the personality traits most strongly associated with mental health scores. The current study’s findings are similar to those from Lai et al. (2019), who reported that neuroticism and conscientiousness predicted mental health and quality of life in BC survivors (N = 207).

Previous research has found that, in individuals treated for cancer, those who report greater expression of positive spiritual variables (i.e., forgiveness) are less likely to experience adverse psychological symptoms (e.g., depression) (Vespa et al., 2011). The current study’s findings that forgiveness independently predicts subjective mental health support those of Smith et al. (2021), who reported that positive spiritual variables, including forgiveness, are associated with mental health but not with self-reported physical health. A scoping review demonstrated that few studies had reported the relationships between forgiveness and physiologic health (Kim et al., 2020). Consequently, the finding that forgiveness predicts an objective measure of neuroimmune (i.e., sAA) activity beyond that predicted by personality is novel. Positive correlations indicate that increased spiritual scores are associated with better mental and physical health. In short, individuals who are more likely to forgive others are more likely to have better mental health and stronger neuroimmune activity, which suggests that lower stress and less resentment are associated with better mental health.

This study’s findings suggest that personality and spirituality are distinct constructs (Piedmont, 1999) that should be identified for treatment by behavioral health specialists, including nurses, and by spiritual advisors, including chaplains or clergy, for behavioral and spiritual issues, respectively. In BC survivors, positive spiritual beliefs aid in the self-management of stress and symptoms occurring during the recovery from BC treatment, which suggests that spiritual interventions may benefit BC survivors (Hulett, 2015; Sterba et al., 2014).

Few studies have investigated the association between personality, spirituality, and sAA biomarker activity. The findings of this study extend previous spirituality research by offering new empirical evidence supporting relationships between personality, spiritual variables, mental health, and sAA. Although more evidence is required, the study’s data suggest that interventions designed with consideration of personality and spirituality may have a beneficial effect on mental health and stress-related neuroimmune activity in BC survivors.

These findings are exploratory and based on an underpowered sample. A full-scale study is necessary to better establish these associations. 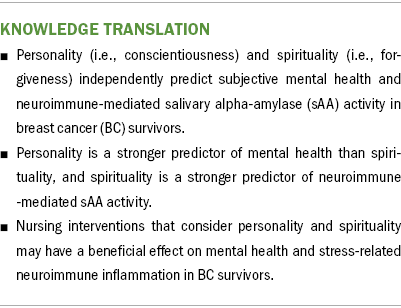 Implications for Nursing and Conclusion

Jennifer M. Hulett, PhD, APRN, FNP-BC, is an assistant professor in the Sinclair School of Nursing at the University of Missouri in Columbia, MO; Brick Johnstone, PhD, is the director of acquired brain injury research at the Shepherd Center in Atlanta, GA; Rami J. Millspaugh, BS, was, at the time of data collection and analysis, a senior research specialist at the University of Missouri in Columbia, MO; and Joshua J. Millspaugh, PhD, is the Boone and Crockett professor of wildlife conservation in the Wildlife Biology Program at the University of Montana in Missoula. No financial relationships to disclose. Hulett and Johnstone contributed to the conceptualization and design. R.J. Millspaugh and J.J. Millspaugh conducted the enzyme immunoassay procedures. Hulett, R.J. Millspaugh, and J.J. Millspaugh completed the data collection. Hulett provided statistical support and the analysis. All authors contributed to the manuscript preparation. Hulett can be reached at hulettjm@missouri.edu, with copy to ONFEditor@ons.org. (Submitted August 2021. Accepted December 20, 2021.)

Cohen, D., Yoon, D.P., & Johnstone, B. (2009). Differentiating the impact of spiritual experiences, religious practices, and congregational support on the mental health of individuals with heterogeneous medical disorders. International Journal for the Psychology of Religion, 19(2), 121–138.